Directional Boring, also known as Horizontal Directional Drilling (HDD), is a trenchless excavation technique that is used to bring pipes, conduit and cables underground. HDD can be used for diameters up to 3 meters and lengths up to 1.5 km.

This technique offers some important advantages over normal digging: 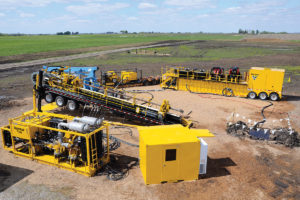 – Virtually no damage to the environment

An HDD starts with a pilot drilling. This brings a drill string into the ground from the point of entry to the exit point. The drill string consists first of a drill bit to loosen the front soil. This is followed by a corner piece (a bent piece of drill pipe) that can change the working direction of the drill bit by rotation. The drill bit and corner piece are also referred to as the drill head. Following the drill head, there are drill pipes of limited diameter. This is always smaller than the diameter of the drill bit.

Integrated in the drill head is the transmitter (sonde) of the measurement equipment (locating system) to determine the location and direction of the bore. Click here for an explanation.

A relatively small borehole is created with the pilot hole. Drilling fluid (bentonite) is applied here. This has a double function: lubricant for the drill pipes to be installed and counter pressure to prevent the borehole from collapsing due to soil pressure. It also serves as a drainage medium for released soil at a later stage. The bentonite is prepared by a bentonite mixer, consisting of a pump and a storage tank. Movie clip of a Vermeer MX240 mixer

After the pilot bore has reached the exit point, the borehole can be cleared / enlarged. A rotating reamer is coupled to the drill string and pulled through the ground to the entry point. Of course, a drill string is also coupled on the other side of the reamer. This gives the borehole a larger diameter. This process can be repeated until the moment that the borehole has the desired diameter.

If done properly, behind the reamer with swivel not only a single product line can be coupled, but also pipe bundles can be drawn with pipes of different diameters or materials.